Harry Stokes wasn’t the only gender variant Victorian in Manchester to hit the headlines. 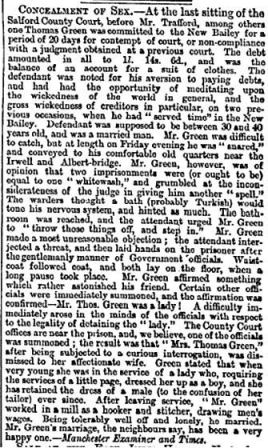 In May 1861, Salford County Court sentenced Thomas Green to 20 days in prison for not paying a debt. He was a repeat offender and this was to be his third stretch in the clink.

Before starting his sentence, Thomas was ordered to take a bath. He objected and wardens learnt that he’s been assigned female at birth. Court officials were summoned, they interviewed Thomas and decided he couldn’t serve time in a male prison. Thomas was dismissed to his “affectionate wife”.

In March 1862, John Jones, appeared at Manchester City Magistrates. He was charged with creating a disturbance at his lodging house, annoying his landlady and threatening to beat his wife Sarah. After promising not to repeat the annoyance the court discharged him, but John “had to be kept in the dock awhile to protect her from being mobbed outside the court” by curious onlookers.  Journalists at the time reckoned that John Jones lived as man for financial reasons – he could earn 2 shillings sixpence a day at ‘man’s work’, but just 1 shilling a day as a woman. 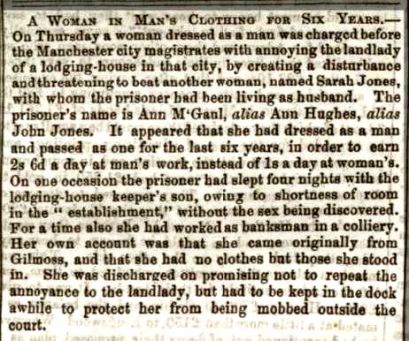