Born in Jamaica, Da-Cocodia moved to Britain in 1955 to train as a nurse, invited as part of a government overseas recruitment drive to staff the newly formed NHS. Like many new arrivals from Britain’s then colonies, Louise was shocked by the level of discrimination she received in the Empire’s ‘Mother Country’. 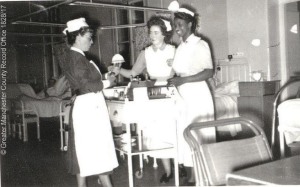 As a nurse-in-training, Louise was welcomed by bosses, but often subject to racism from colleagues and patients. Through hard work and perseverance she rose through the ranks. In 1966 she was appointed Assistant Superintendent of District Nurses, the first Black senior nursing officer in Manchester. Even as a manager she experienced mumbled racist remarks from resentful staff; “Those black so and so’s coming here and giving us orders!”

These experiences of prejudice fuelled a desire in Louise to combat discrimination, to dedicate herself to tackling race equality issues:

“deep in my mind is my commitment to bridge the gap which has led to the blacks being treated as inferior.”

In the 1960s and 70s she served on regional Race Relations Board committees, handling complaints brought under brand new discrimination laws. In 1980s she helped transport victims of the Moss Side riots to hospital, and later sat on the Hytner inquiry panel investigating the causes of the unrest. She also researched and published a paper highlighting the effects of racism in nursing.

Da-Cocodia believed passionately that everyone has the right to access housing, education and employment where they feel safe, secure and fulfilled. She spoke of how important it was “…to help young Black people understand that this is their home, this is the society they live in, and that they have a part to play in developing it.  Young Black people need role models around, not necessarily high profile ones…”

“…You can get what you want through hard work and determination, even with the prejudice that they will face from time to time.  This is my honest belief.”

She worked tirelessly to improve people’s quality of life, both on a grassroots community level where she was affectionately known as ‘Mrs D’; and on a more formal level.

She served on an impressive list of governing boards and committees, influencing policy and strategy at organisations such as Manchester Health Authority; Voluntary Action Manchester; the Church of England; school and higher education establishments. Incredibly she also found time to be lay inspector at the Crown Prosecution Service; a Justice of the Peace; and Deputy Lieutenant of Manchester.

She co-founded and steered a number of community enterprise schemes, helping to raise the education, housing and employment aspirations of thousands of Manchester’s inner-city residents. 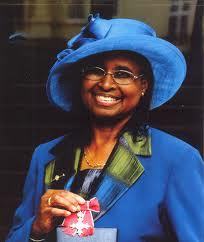 Louise Da-Cocodia in 2005 with her MBE for services to the people of Manchester.

At home she loved singing, Bob Marley’s ‘No Woman, No Cry’ a particular favourite; and a picture of her hero Martin Luther King hung on her sitting room wall. As a royalist, she was proud to be invited to receive honours from the Queen. In 1992 she was awarded the British Empire Medal for her contribution to Greater Manchester’s West Indians’ Organisation’s Co-ordinating Committee; and in 2005 she received an MBE for services to the people of Manchester.

Her legacy lives on through the community organisations she initiated. In 2008 Carrioca Enterprises renamed its education arm ‘the Louise Da-Cocodia Trust’. It continues to build on her efforts to improve schooling opportunities for young people of Afro-Caribbean heritage. In 2011, to honour its founder member and first chair, Arawak Walton Housing Association named a new housing development in Trafford ‘Louise DaCocodia Court’. 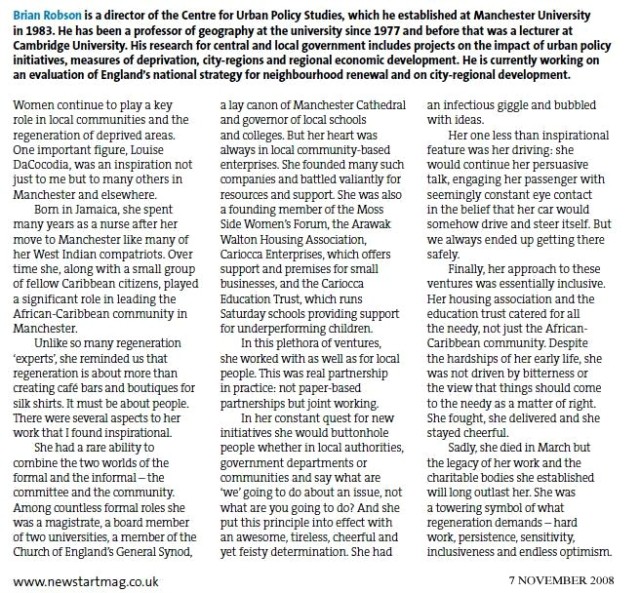 The list of photos relating Louise Da-Cocodia held by the Greater Manchester County Record Office can be found here. Two of the photos are on Archives+ Flickr account here.

Da-Cocodia, L. (1984). The probable effects of racism in nursing and related disciplines, in International Journal of Social Psychiatry